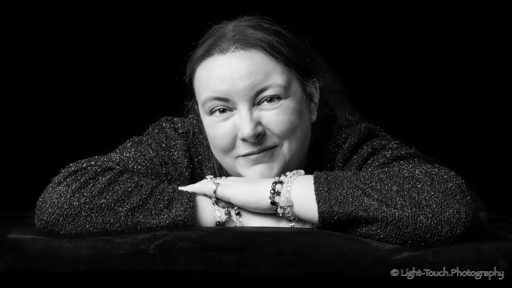 Hi. My name is Karen Tucker. It is also Rhianna Nodens. It’s a long story, but basically, Rhianna is my chosen name, and the one all my pagan friends know me by – including my partner and his family. So where you see work credited to Rhianna Nodens, that’s me as well.

The information below also appears on my Amazon Author Page.

As a child, stories, poems etc fascinated me. I used to listen avidly to my mother as she read to me, even learning some of the pieces by heart and ‘reading’ along with her, long before I understood what the squiggles on the page meant. The one I remember with most fondness is a poem about ‘coat of blue and red sou-wester’. Perhaps because of this attention from my mother, I was able to read and write before I started school, and by the age of 7, my parents were told I had a reading age of 14. This is probably why, when my teacher bought Topsy and Tim books for all her class, I alone was given something different – a magical children’s novel by Noel Langley, entitled The Land of Green Ginger.

For as long as I can remember, I have made up my own stories. Recently, my mother found an old ‘book’ I had made – a tiny scrap, a few pages long, into which I had transcribed several (very!) short stories. I can’t have been more than about 9 when I wrote that! Even back then, writing was something I longed to do for a career.

But I had no knowledge or experience I could really write about back then. This was forcibly borne in upon me when I signed up for a writing course and found myself stuck on the first assignment, which was to write an article for a magazine or newspaper. I couldn’t think of a single thing I felt competent enough to comment on! And while I was still contemplation what I might be able to write about, the company went bust and I lost my money. But I never lost the desire to write.

I joined a local writers’ group, The Write Idea, after becoming aware of them through means I no longer remember. We had plans to publish a magazine/book of short stories with some of our work, but somehow it never happened.

Subscription to Writing Magazine and Writers’ News helped me develop in many ways, not least by entering their monthly and annual short story competitions. I was shortlisted a couple of times, which boosted my confidence that I had some writing talent, but I never achieved the highest prize and got my work in print in their publications.

Through one of these magazines, however, I did get my first publication. The New Writers competition, advertised in their pages, finally accepted my short story, Full Circle, after rejecting it twice, with very helpful comments on how I could improve it. I had written the original version of this story for a competition to celebrate an anniversary of Robert Louis Stevenson, and had tried to write in imitation of his style. I was somewhat surprised, therefore, to find that my old-fashioned ghost story had been seen by the publishers as being written in a style similar to that of Jane Austen!

My first publication in a non-fiction context was nearly the end of me. I had written to a new cross-stitch magazine and finding my letter published in the next edition, I stopped in pride and amazement to relish the moment. Unfortunately, I happened to be in the middle of Queen Victoria Street in Blackfriars at the time, and the traffic lights were just about to change! Fortunately, I noticed in time to avoid being run over by the rush-hour traffic.

Further success came in 2003, when my paranormal crime novel, Past Sins, was shortlisted for the Debut Dagger Award by the Crime Writers’ Association. It didn’t win, but on attending the awards dinner I sat at a table with several big names in the crime-writing world, all of whom were delighted to hear that I was hoping to join their ranks, and generously wished me luck. That novel is now completed in draft, and I’m part-way through the editing process. I have several ideas for follow-up novels, so it could turn into a whole series one day. In the meantime, a collection of short stories starring the heroine of Past Sins is now available on Amazon (Kindle version only), under the title of Liberty Gibbens, Paranormal Investigator – Volume 1.

Some of the Liberty Gibbens stories have been inspired by the short stories in my first two collections, Horripilations Volume 1 and Volume 2, and I’m currently working on further volumes, which will contain more continuations of some of these tales.

I continued writing, finding a market for my non-fiction work in writing reviews for Paradigm Shift magazine, and honing my craft. Then, in 2010, I entered the world of NaNoWriMo. A colleague had posted on our Yammer network that the event was starting that day, so I took a moment to think, and worked out a rough plan for a novel. Then I set to work and wrote it. 26 days and 75,000 words or so later, the first draft was finished! One of the prizes for completing the challenge – which is to write at least 50,000 words of a novel in the month of November – was to receive 5 free copies of your book from Amazon’s Print-on-Demand service, CreateSpace. So I took the time to set up the book for printing, ordered my free copies, and then figured that I might as well go on to offer it for sale on Amazon. Healing The Wounds is now available in both Kindle and paperback versions, and I am working on its sequel, Claiming the Pearls. First chapters of both can be seen on my Novels page.

I now have a number of publications available on Amazon – 2 novels, a paperback and Kindle compilation of several of my collections of short stories, and a collaborative spiritual novel, written with a friend in America.  See my Published Works page for more details and links.

I have many other novels that I’ve started writing and not yet completed. Perhaps one day, when I have the time … ! In the meantime, in order to earn a living, I’m looking at writing for the non-fiction market. As I have qualifications in a number of holistic therapies, this is likely to be the area where much of my work comes from, and I look forward to furthering my writing career.